When I first came to the Başbakanlık Arşivi at its old location in the İstanbul Provincial Governorship's Vilayet Bahçesi in 1956, opportunities for research were extremely limited. The only collections that were readily available were the Mühimme and Mühimme-i Mısır registers of Imperial fermans, themselves not entirely complete, the mass of financial registers heaped together in the Kâmil Kepeci collection, and the thousands of documents brought together in the Ali Emin, Ibn ul-Emin, Cevdet and Fekete collections[l]. The summary catalogues compiled for the latter by a series of commissions were, however, not available to researchers, who therefore had to depend on the interest and goodwill of the archives staff to provide them with materials pertinent to their subjects. It was a difficult situation, made palatable only by the expertise and dedication of the reading room staff, then led by the late Ziya Eşrefoğlu, who always were willing, not only to produce registers and documents, but also to help beginners like myself to understand the mystefies of the styakat, divani and other exotic scripts which Ottoman scribes used to conceal their work from all but the most initiated. Cataloging new materials proceeded very slowly in the hands of aged former civil servants whose chief qualification was their knowledge of the older scripts in which the documents were written; as they died out, moreover, this work slowed to a halt. Under such conditions, the pioneering work of such great Turkish historians as Ömer Lütfi Barkan, Fuat Köprülü, İsmail Hakkı Uzunçarşılı, Mukrimin Halil Yinanç, Osman Ergin, Abraham Galante, Tayyı p Gökbilgin, Halil inalcilt and others becomes that much more remarkable. Research conditions improved tremendously during the next three decades, particularly during the directorships of Midhat Sertoğlu and Nejat Göyünç, with reading room staff led by Ziya Eşrefoğlu's successors, Turgut Işıksal and Rauf Tuncay, and their successors led by Necati Aktaş and Attilâ Çetin, making catalogues of these collections available to researchers, though the latter stili were left with the formidable task of searching through thousands of summaries to find documents pertinent to their topics. Research, moreover, continued to be limited by a whole series of restrictions. Research permission for no more than one year was granted only after months of delay, and then only for limited topics and periods of time, with opportunities for renewals erratic at best. Available catalogues continued to cover only a small portion of the collections, while the work of cataloguing other materials proceeded slowly if at all. Microfilming and xeroxing of materials was restricted to no more than one hundred photographs during each calender year. Government restrictions, moreover, limited research to the years before 1914, thus excluding for a whole generation of researchers the registers and documents emanating from the last decade of Ottoman existance, involving both World War I and the Turkish War for Independence.

It is in the light of these long decades of difficulties for researchers, Turkish and foreign alike, that the rapid changes introduced to the Başbakanlık Arşivi since 1988, first under the direction of General Director Professor Dr. Ismet Miroğlu and Ottoman Archives Director Professor Dr. Yusuf Halaçoğlu, and since 1991 by the first professional archivist to direct the archives, Necati Aktaş, have come to astonish all those who experienced the problems of the past. The first step came in 1988 when the archives moved into two new five-story buildings located on Ticarethane Sokak behind the Yerebatan Cistem museum, opposite the Sultan Ahmed and Aya Sofya mosques, though plans remain for a subsequent move into new quarters within the outer precincts of the Topkapı Saray once the area is evacuated by Turkish army units watching over the passageways between the Sea of Marmara and the Bosporus. Most of the limitations previously placed on research after 1914 were removed by a new archive regulation issued by governmental decree in June 1989,which also has greatly eased the process for obtaining research permissions and removed the burdensome limitations previously imposed on xeroxing and photography. Researchers now can obtain permission either by application to the Turkish embassy in their home countries, which should take no more than one month, or by direct application to the archives in Istanbul, which normally issues permits in one or two days. Residence permits no longer are required for researchers who remain in Turkey less than three months.

A greatly expanded staff, including some four hundred young and energetic scholars, moreover, was put to work cataloging additional materials which were made available to researchers in rapid-fire fashion, producing a total of 77,623 registers and 1,654,286 documents between 1987 and the end of 1989. These changes have been most apparent, of course, for the materials after 1914. The continuous nın of registers of Council of Ministers minutes (Meclisi Viikek^ Mazbatalan) and of the archives of the Prime Minister's office (Babtali Evrak Odası) are now accessible, though the latter at least, can be used only by consulting the original registers of incoming and outgoing correspondence, which do not always indicate which dossiers individual documents were transferred to. Not only are the chronological catalogues of documents related to imperial orders available in the Irade collection for the years after 1914, but all the dossiers compiled in the Prime Minister's office for important subjects also have been opened to researchers. Documents regarding the Armenian Question, have been made available on a series of 19 microfilm reels for the years up to 1895, with the remaining 30 reels covering the years 1923 scheduled to be made available during the next year, and copies sent to the major national libraries in Europe and the United States.

Even for the years before 1914, already open to research, major new collections have been made available, including registers of Sultan Mahmud II's new Asâkir-i Mansure Army between ı 8o6 and 1845. While the rildtz Palace archives were partly available for some time as the Esas Evtak collection [2], an even larger portion of the collection which had not been fully catalogued is now open and fully available, including correspondence between Sultan Abdülhamid II and his diplomats in various European capitals and conferences, in two collections of documents presented to Sultan Abdülhamid through the hand of his chief Scribe (Mâ— beyin Başkâtib:), the Sadaret Husus:. Maruzat collection of 39,403 documents and the Sadaret Resmi Mangal collection of 41,458 documents and also 6,987 documents left from the private archives of Kâmil Paşa,one of the major political figures of the time. Included in the Resmi Mangal Evraki, for example, are dossiers regarding Ottoman intemal and extemal debts, declarations of war, peace and martial law, arranging for temporary regulations (kararnames) issued while the Parliament was not in session, orders for the dispatch and use of the army and fleet, expenditures within and outside the regular budget, treaties and concessions, and preparations of regulations for the different govemment departments.

Regarding East Rumelia between 1902 and 1909, 18,261 documents are available from its General Inspector's office (Rumeli Miifett4liğı), 5,961 documents regarding Edirne, Yanya and Işkodra, 47,469 regarding Monastir, 48,723 regarding Kosovo, and 50,481 regarding Salonica. For more limited periods involving the last century of the Ottoman Empire, collections recently opened include, in addition to those cited above, a register of petitions submitted to Sultan Abdülhamid II (rı /dız Maruzat Defterkn), covering some 15,679 documents for the years from I88o to 1904, 973 registers of the Imperial Privy Purse (Hazine-i Hassa) for the years from 1826 until 1887, 1982 registers of the Ministry of Health (Szhhiye Nezareti from 1838 to 1923, 6 registers of 49,298 documents regarding Bulgaria between 1875 and 1918; one register of 8076 documents regarding East Rumelia between 1902 and 1904; 6 registers of 6017 dossiers related to Impedal Orders (Irade-i Hususiye) issued between 1893 and 1909.

It should not be supposed, however, that older Ottoman materials have been neglected. The catalogs of the older document collections are being checked and revised and perhaps most important of all, computerized indexes are being prepared to greatly simplify the task of finding pertinent documents. Important collections of registers and documents previously even unknown to researchers have been catalogued and made available, including the account registers of the Accounting Office (Bab-z Defteri) for the years from 1512 to 1853, the Istanbul Markets Regulation office (Istanbul Ihtisabi) from 1450 to 1840, the Janissary Pay Registers (Bab-z Defteri renigri Kalemi) from 1544 to 1826, Army Infantry pay registers (Bab-ı Defteri Piyade Mukabelesi) from 1556 to 1842, Cavalry registers (Bab-ı Defteri Sıivari Mukabelesi) from 1565 to 1845, Poll tax registers (Bab-ı Defteri Cizye Muhasebesi from 1559 to 1848, and registers relating to non-Muslim millets from 1475 to 1836, 1230 registers of the Ottoman Imperial Mint (Darphane defterlen) from 1696 to 1881.

As if all of this is not enough to whet the appetite of those doing research on Ottoman history, other collections are stili in process of being brought together, catalogued, and made available, including the vast ar chives of the Ottoman ministries of Interior and Foreign Affairs, the latter only recently transferred to the custody of the Başbakanlık Arşiv: by the Ministry of Foreign Affairs. Other archives, though separate, also are now available to researchers, including those of the Ministry of War, available in the Historical Research Department of the Turkish General Staff (Genelkurmaıllarb Tarih Arşim) and of the Grand National Assembly (Büyük Millet Meclisi) and Presidential Palace (Çankaya Köşkiı). In addition, all archival materials regarding the Turkish Republic are now being concentrated in the new Republican Archives (Cumhuriyet Arşim) in Ankara, and it is to be hoped that this collection, still in the process of organization under the direction of Dr.Ismet Binark, will soon be made available.

The main problem remaining to researchers on Ottoman history now is to go through and consult the immense volume of materials being made made available to them. There can no longer be any excuse, however, for any scholar doing research on any subject concerning the Ottoman Empire, even involving relations between it and the Great Powers ormatters conceming the various nationalist revolts that inflamed the Empire during its last century, not to spend considerable time examining the sources now being made available in the Başbakanlık Arşivi.

ARCHIVAL MATERIALS IN THE BAŞBAKANLIK ARŞİVİ OPENED FOR RESEARCH SINCE 1987 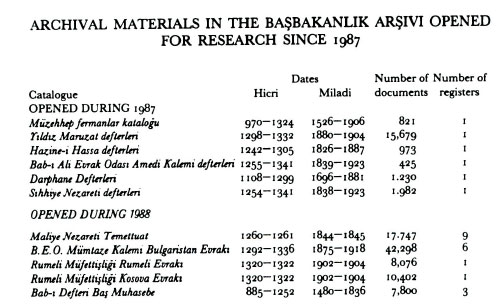 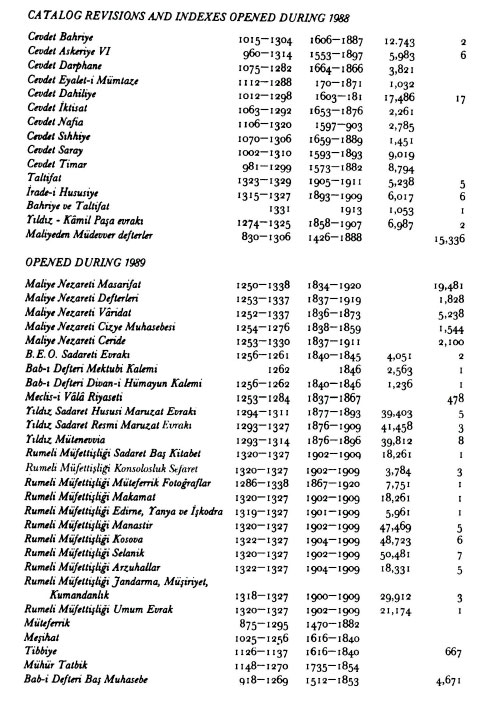 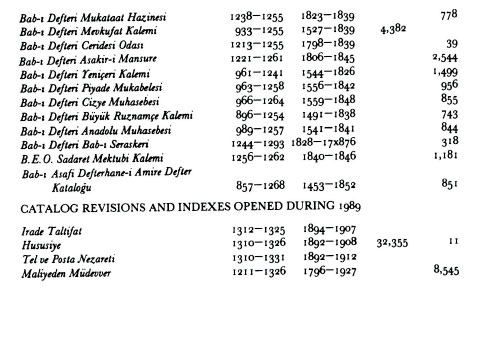