A Fragment of Pediment from Cyzicus

The ancient city of Cyzicus, located on the southern shore of the sea of Marmara (Propontis), was one of the most prosperous cities of Asia Minor during classical antiquity. The city was established on tire southern part of the island of Arctonnesus that was later joined to tire continent[1]. According to literary sources, Cyzicus was colonized twice, the first of which was in 756 BC[2]. However, the present references to the king of Cyzicus in the legend of Argonauts[3] implies that the history of the city may go back to as early as the Late Bronze Age. The city of Cyzicus showed a rapid development in the Archaic and Classical periods as the famous “Cyzicus Stater” was highly valued and widely distributed[4], indicating that Cyzicus had a powerful economy during this period.

Cyzicus appears to have reached its peak during the Roman period. The fragment of pediment examined in diis paper is one of the indications of the wealth and prosperity of the city. This pediment of fragment has been found coincidentally during the construction of the Bandirma-Erdek highway (Fig. 1) and appears to have belonged to a monumental burial. Due to the construction of the road, it was impossible to figure out the nature of the structure that this distinctive architectural fragment belonged to. No architectural evidence excluding rubble stones and mortar fragments have been found near the place where this pediment fragment was first found to identify this monument in detail. This paper argues that this fragment belonged to a monument that commemorates a Cyziqene noble who died in the late second century A.D.

The fragment in question appears to have belonged to the corner of a triangular pediment and is made of white marble[5]. It has wave and dentils under the palmette motif at its sima and an egg-dart patterns, wave, and dentils at its gcison. In terms of human figures, a sitting female figure, who is stretching her right leg under her left leg that is drawn back slighdy, occurs on the corner part of the pediment (Fig. 2). The figure turns her head to the right towards the audience and holds a horn of plenty with her two hands. The girdle belonging to the long tunic that she wears is tied under the breast. A standing male is depicted to the left of this sitting female figure. This naked male figure has a worn surface which is carved on a rectangular two-step pedestal, as if the figure walked towards his right. The right arm and hand of the figure is incomprehensible and eroded to large extent; the object that the male figure is holding in his left hand is incomprehensible. Despite this poor preservation of the pediment, it is reasonable to say that the naked male figure is holding a bunch of grapes.

In the preserved acroterion of the pediment (Fig. 3), a lower part of a female figure wearing a himation over a long tunic has been partially preserved. What appears to be a box, the front of which is broken and the inside of which is carved as a rectangle, is placed to the left of diis female figure. The palmet, wave motifs and dentils arc also carved on the lower part of the acroterion. The back part of the pediment is also poorly preserved (Fig-4).

Because only two of the figures depicted on the pediment facade were preserved, we cannot clearly identify the subject depicted here. Thus, it is open to tentative interpretations. The male figure carved on the pedestal of the pediment appears to be in the midst of a forward attack. It is probable that this male figure may have held a bunch of grapes in his left hand (Fig. 2). This is not surprising in view of the fact that similar figures holding bunches of grapes are often seen on the Cyziqene gravestones of the second century A.D[6]. The significance of diose motifs probably springs from the fact that Cyzicus played an important role in olive oil and wine trade.

It is nearly impossible to know exactly whether the object that the excessively worn female figure sitting at the corner of the pediment holds is a horn of plenty or a bunch of grapes (Fig.2 ). If we accept the idea that this is a horn due to its crookedness, then it is reasonable to assert that it symbolizes strength, power and abundance. The function of the box, which is placed to left of the female figure, cannot be clearly identified.

The date of this pediment fragment can be determined through a series of comparisons of style and iconography. The closed palmet modfs with diin leaves carved on the surface of the pediment can give us a relative dating about this artifact when its stylistic features are taken as criteria (Fig.5). The axis and petals of palmets arise from the lower part as a single root and separate into three sections over the zone. The side leaves are tied to the axis leaf with a girdle. The sucker leaf, which twists down after arising from the point that the side leaf twists upwards, joins to the volute. Palmets have no connection with each other. This carving style shows completely ornamental characteristics. These palmets are nearly identical to those depicted on the architectural fragments of the Ephesian Theater Gymnasium, which has been dated to the Late Antonine-Early Severian period[7]. But, in the example of Ephesus, the leaves of palmet are larger and the petals and axis leaves arise from maulure one by one. The fact that the palmet leaves of the pediment are thin and volutes arise under the lower leaves resembles the ornamentation of the temple of Sillion, which is dated to the period of Emperor Septimus Severus[8]. However, the treamient of the ornaments and degeneration in the Cyzicus pediment is not as great as that of the example from Sillion. In the egg and dart pattern carved on the geison, smaller eggs, in the excessively widened pots with thin walls, are tied to the lower and upper parts widi string (Fig. 6). Darts are squeezed between the pots. This is probably due to the level of the corruption derived from the overuse of the drill.

The date obtained from comparable examples of stylistic ornaments can be confirmed by the comparisons of the human figures depicted on this pediment fragment. The naked male figure standing on the pedestal and the seated female figure depicted on the comer are poorly preserved (Fig. 2). Therefore, it is difficult to use them for stylistic comparisons. The lower half of the female figure standing at the corner acroterion (Fig. 3), however, can be used to evaluate the pediment. As the spaces between the twists are deeper and carved widi more details, the twists seen on the lower part of the figures are different from similar figures depicted on gravestones of the middle of the second century A.D[10]. However, strong similarities are shared with the twists between the feet of figures sitting on the left at the gravestone in the second half of the second century A.D [11]. The twist of the coat hanging down from the left of the figure at the corner acroterion, has a more plastic and baroque feature which goes beyond the twist of the coat of the figure on the right in the Jason and Kreon[12] stage dated to 150-160 A.D.

The folds seen in the female figures of the pediment and of the corner acroterion are quite plastic, while the spaces of twists are separated by deep canals. There details reflect the style of the last quarter of the second century A.D. (Fig.2-3). However, this sculptural work goes beyond the peak of baroque character of the Antonine period as well as tire style of the work that commemorates the victory of Marcus Aurelius currently kept in Palozzoi dei Conservator! Museum in Rome[13] We can also see “V” twists, which are on the left front foot of the female figure at the acroterion and on the left foot of a statue of the Antonine Period that is kept in Pergamon Museum[14]. The figures of our Cyziqene fragment appear to be more advanced from this Pergamené example in terms of the way the twisting is depicted. Another comparable sculpture that demonstrates a similar twisting is the relief dial depicts Andromache and Hecabe[15]. It can be stated that the Cyziqene example is also more advanced than this example in terms of stylistic features. Considering the advanced features of the sculptural style observed on the Cyziqene pediment over the comparable examples of the second half of the second century A.D., this pediment in question may be dated to the late second century A.D.

It is difficult to identify which kind of structure this pediment fragment once belonged to. The measurements of the pediment indicate that it was a monumental structure. It was built outside the city walls, suggesting that it was not a part of a monumental gateway or an archway. The mortar traces and rubble stones found nearby imply that it may have belonged to a monumental grave commemorating a certain noble. The presence of fragments of sarcophagi documented around this fragment indicates that this area was also part of the city’s necropolis[16]. This monumental grave found in the necropolis area near the entrance to the city was probably intended for visual display for those entering the city. Surface findings documented in the area imply' that similar monumental graves once stood in this northwestern part of the city[17].

If we accept this pediment fragment as a monumental grave, then the question of to whom this grave belonged should also be answered. As the work shows the style of Late Antonine-Early Severian period in tenus of both stylistic features of the figures and the ornaments, it is useful to examine the historical events of the periods that involve the city of Cyzicus in order to identify- the person to whom diis monument was dedicated. It is well known that a battle between Roman Emperor Septimus Severus and Pescennius Niger, who rebelled against the Roman Emperor, took place near the city of Cyzicus in 194 AD. Because the Cyziqene people supported Septimus Severus, the victor Emperor stayed there for a while[18]. Thus, it is assumed that this monumental tomb, a fragmentary pediment of which is described above, once belonged to a Cyziqene nobles who fought in this batde in 194 A.D. This monumental grave was built in diis part of the city so that people could see it[19].

Fig. 1 . View of the front the fragment of pediment.
× 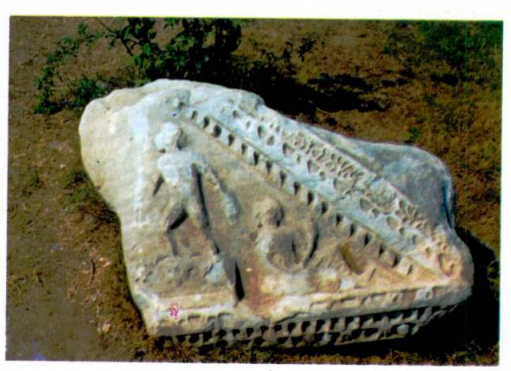 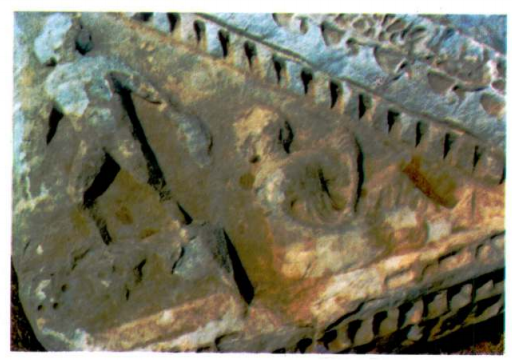 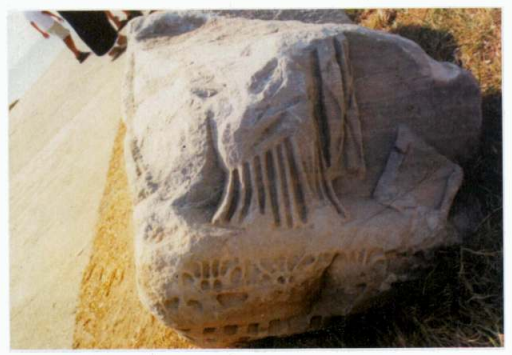 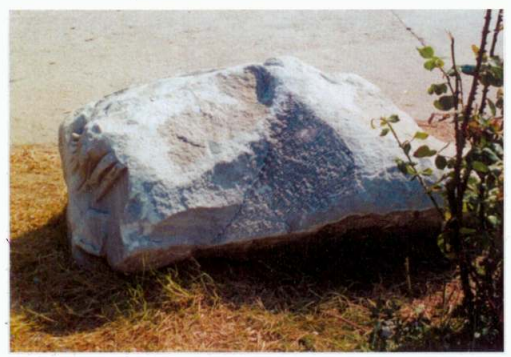 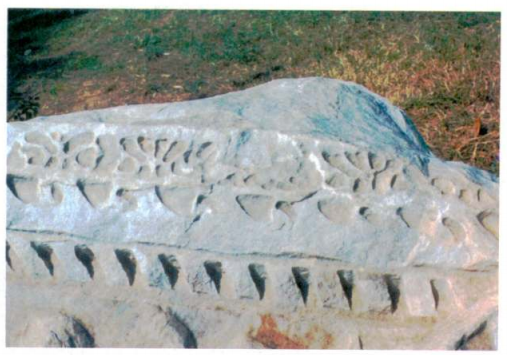 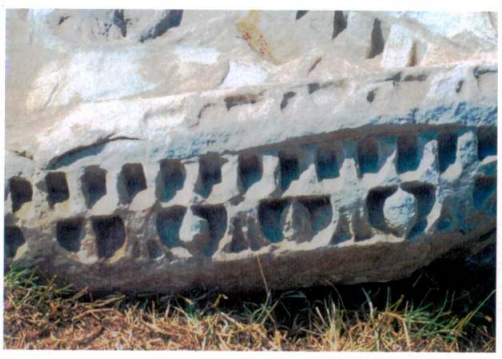 * I thank to Prof. Abdullah YAYLALI, the leader of the Cyzicus Excavations, for allowing me to publish this architectural sculpture that I found during the surface surveying of the site.

Fig. 1 . View of the front the fragment of pediment.
×