Two inscribed bricks Ö. 1485 and Ö. 1486 are in the Archaeological Museum of Ödemiş[1]. The bricks are intact and their faces and upper edges are inscribed. Of the two bricks the one with the inventory number Ö. 1485 can be dated to the reign of Ashurnasirpal II (883-859 BC) and Ö. 1486 to the reign of Shalmaneser III (858-824 BC). Both of the inscribed bricks came from Nimrud-Calah[2]. Both of the inscriptions found on these bricks are well attested. Ö. 1485 is known from duplicates on clay cones (sikkatu) and bricks[3]. Ö. 1486 is known only from duplicates on bricks acquired at Mousul and from the collections of the British Museums (cf. C.B.F. Walker, Cuneiform Brick Inscriptions=CBI, 1981, p. 113 No. 159) published long ago[4]. Of the bricks published by Lehmann-Haupt, three (Nos. 13-15) with dimensions almost identical to those of Ö. 1486 and inscriptions in seven lines; and a fourth with an inscriptions of five lines are duplicates of our text with minor variations. No. 15 of Lehmann-Haupt is once more published in copy in 1985 by Liane Jakob-Rost - Joachim Marzahn[5] and bears the inventory number VA 8987 in the Vorderasia. Museum of Berlin. Ali of the inscribed bricks point out to the fact that they were used for the construction of the ziqqurat (stage-tower) of the city of Calah. Of the two brick inscriptions whose contents were referred to in the aforementioned publications are presented below in transcriptions, translations, copy and commentaries where necessary[6]. Ö. 1485

This text is found at various sites -Calah, Nineveh, Imgur-Enlil and Ashur- inscribed on bricks, clay cones (sikkatu) [7], clay hands[8], stone[9] and once on a stone sarcophagus[10] fifty examples have been identifiedn[11].

According to the bibliography and catalogue compiled by A. Kirk Grayson only two of the six examples on bricks are known to have come from Calah with certainty[12]. In the catalogue prepared by Grayson except the two bricks (Nos. 3 and 35) the others have been defined (Calah?) and their provenance are obscure[13]. Although the provenance of Ö. 1485 is not specified by its inscription, its similarity in color, dimensions, consistency of clay and from to Ö. 1486 of which provenance is specified as Calah may lead us to the conclıısion that it also came from Calah. In that case three bricks with text came from Calah[14].

The importance of this inscription is in the lines 6-7: ri-sip-tü[15] U6.NIR URU kal-bi from which one can be sure of the fact that Shalmaneser III had indeed built the ziqqurat of the city of Calah[16]. With the five duplicates of the inscription, three with seven-line inscription[17] published by Lehmann- Haupt and one with five-line inscription[18] with the addition of the Berlin brick (VA 3268a=VAS 23, No. 108) including our text under discussion and of the ones treated in CBI No. 159 the number of bricks reaches nearly twenty[19]. The text, that was also published by Lehmann-Haupt, Mat. No. 16 bears an additional sa (line 5) following ri-sip-t (1.4) which also occurs in CBI, No. 159:6 and missing in the seven-line inscriptions in ibid Nos. 13-15 and CBI, No. 159, helps us to understand the implication by (4) ri-sip-tü (5) sa U6.NIR URU kal-bi" building brick of the ziqqurat (stage-tower) of the city of Calah". The double usage of the possessive may cause a translation "it belongs to the building (construction) of the ziqqurrat of the city of Calah". Of the duplicates with seven lines, only Lehmann-Haupt, ibid No. 13 has been inscribed on the face, whereas No. 14 and 15=VAS 23,109 have three lines on the edge, and Ö. 1486 two lines on the edge. Lehmann- Haupt, ibid No. 16 and VAS 23, 108 are each five line inscription of the same text (cf. also CBI 159 duplicates with fıve lines) that they are not duplicate texts can be proved by the fact that Berlin text is broken at the left had half. Further, the bricks (VA 3268a=15x23 cm. and 34x16x11.5) as pointed out by Lehmann-Haupt, that the brick must have been found at Mousul and acquired for Berlin (Kgl. Museen, Berlin V.A. 3214) but is not found among the brick published in VAS 23[20].

Four successive Assyrian kings can be gathered with the help of these two brick inscription. Namely,

Ö. 1485 is from the palace of Ashurnasirpal II and Ö. 1486 is from the Ziqqurat of Calah and refer to the span of a total of 59 years of the last two kings which we referred to above.

An Assyrian soldier carry a spear in his right hand with a shield. He has long beard and hair. He's clothed an undecorated dress and a belt. Tuft of his dress hang down from belt. Below the knees are missing, but traces of the stocking is visible. Behind him, there are the folded hands, the edges of dress and beard of another figur. Above the soldier, there is a mountain representation.

This relief fragment, probably, came from North Palace of Ashurbanipal at Nineveh. This type of shield was carved on both Senharib's and Ashurbanipal's palaces reliefs[21]. But our soldier was exactly depicted the sculptures from Palace of Ashurbanipa[22]. These soldiers, in war scenes, always stand before the king as the bodyguard. The officiers with the folded hands were behind them. Officier's hands, the edges of his dress and his beard has been preserved on our relief.

We think, this relief belong to the block that was showed Ashurbanipal's campaign to mountainious country, because of the mountains representation above the soldier. 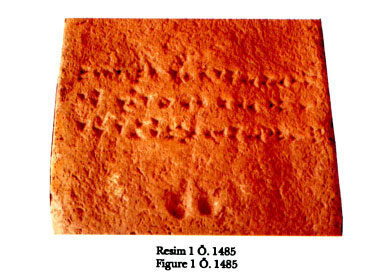 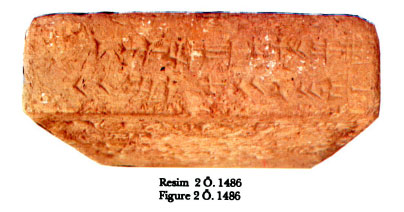 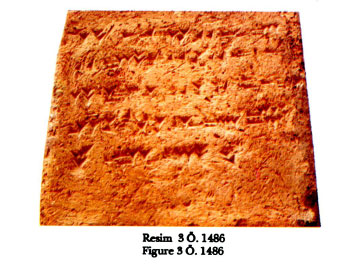 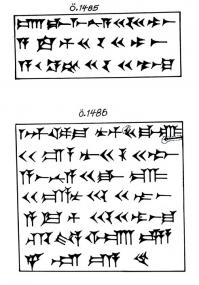 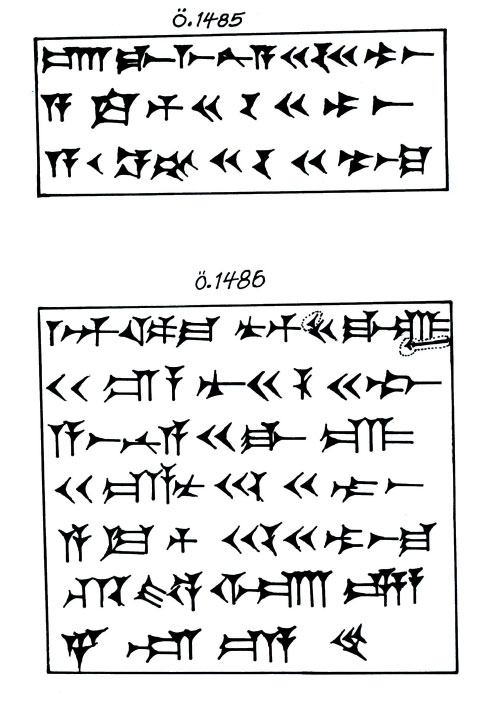 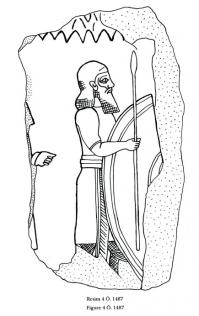 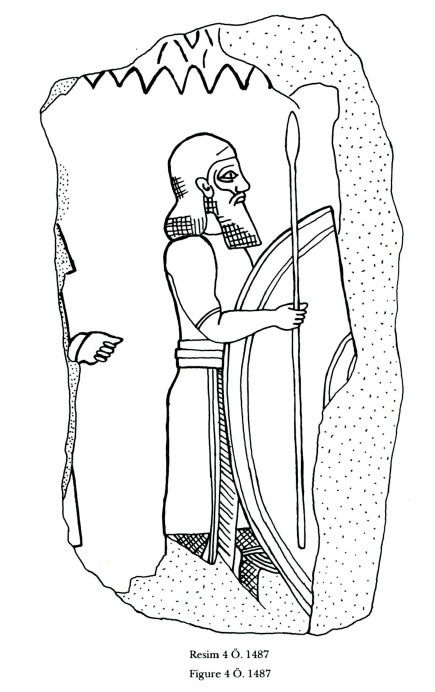