A Hieroglyphic Seal Impression From Samsat

During the 1987 campaign of the excavations at Samsat Höyük, the largest settlement in the lower Euphrates basin, conducted by Professor Dr. Nimet Özgüç in the framework of the archaelogical salvage project, a hieroglyphic seal impression has been found, which added a new document to the relatively poor repertory of written material of this important mound (fig. 1 a-b)[1]

The seal impression (Inv.nr: St. 87-4) on a buff-coloured, conical piece of clay of 2.4 cms in height, with a string hole at the pointed end, has been brought to light in the eastern trench in the grid square r/15, at the level of the XXV. building layer, but in the erosion soil. According to the concave surface of the impression, which has a diameter of 2.4 cms., it should have been produced by a bi-convex button seal, which had a simple ladder motive as the frame of the central area bearing the hieroglyphic signs. Although this sort of frames can also be seen on the metallic seiils, usually with tripod handles, the bulla of Samsat seems to be impressed by a stone button seal. The first two signs, placed on the perpendicular axis of the bulla, are L. 432. Under them there is a rather fade L.278, the lower edge of which seems to be broken off. These three hieroglyphs read the name of the owner of the seal Zu-zu-li. The signs L.289, put to both sides of this main group, show that he bears the title CHARIOTEER. No other hieroglyphic or decorative signs can be seen on the impression.

This name is documented several times and its pronounciation can be established as Zuzulli according to its cuneiform attestations (NH and Supp.: Nr 1590; Boehmer & Güterbock 1987: Nr 181, 197, 198). One of these hieroglyphic evidence is for the evaluation of the Samsat bulla of great interest. A fragment of a cuneiform tablet found at Ugarit (RS 17.371 + 18.20) bears a seal impression, which belongs to a person of the same name and title; it also has a similar composition of signs (Schaeffer 1956: 56 Fig 79)· It becomes evident from the contents of the tablet, that this Zuzulli is the CHARIOTEER of the king of Karkamis (Laroche 1956: 152), the name of whom remains obscure. On the other hand, two bullae found during the 1985 season of excavations at Lidar Höyük, some kilometres north of Samsat on the eastern shore of Euphrates, sealed by Kuzi- Tesup, king of Karkamis, who ascended to the throne of his father Talmi- Tesup, (Sürenhagen 1986: 183-190; Hawkins 1988: 99 f) clearly show, that this region came under the influence of Karkamis at that time. The tablet of Ugarit contains a contract with the merchants of the harbour city of Ura during the reign of Niqmadu III of Ugarit, who is contemporaneous with Talmi-Tesup of Karkamis. Recent research has shown, - in accordance with the bullae from Lidar Höyük - that his son, Kuzi-Tesup has expanded his territory, using the lack of authority after the collapse of the Hittite Empire (Hawkins 1988: 101 ff). The bulla from Samsat, the owner of which is most probably identical with Zuzulli of the Ugarit seal impression, seems also to be in favour of the proposal, that Tarhuntassa in the West and Karkamis in the East have claimed the heirship of the hittite royalty and thus shared the remains of the empire. the CHARIOTEER of the King of Karkamis Talmi-Tesup, who sealed the contract of merchants of Ura in Ugarit, could have held office also in the reign of Kuzi-Tesup and acted in the recently gained lands in the North such as Samsat and in and around Malatya. Another hieroglyphic bulla bearing the same name, the provenance of which is uncertain, has the title PRINCE (Kennedy 1959: Nr 34). This PRINCE Zu-zu-li could also be identified with those on Samsat and Ugarit documents, since CHARIOTEERS were high ranking officials, among whom members of the royal family have been attested. We know at least two hieroglyphic documents, the first a seal from the vicinity of Sivas (Dinçol & Dinçol 1981: Nr 1), the other an inscription from Tell Atchana (Woolley 1955: Pl. XLVIII), where the titles PRINCE and CHARIOTEER are being used together. Although the bulla of PRINCE Zu-zu-li bears no other title, he could be the same person as the one on the Samsat impression.

Figure 1. a) The moulding of the bulla b) The impressed face of the conical bulla a) Bullanın mulajı b) Konik bullanın baskı yüzeyi
× 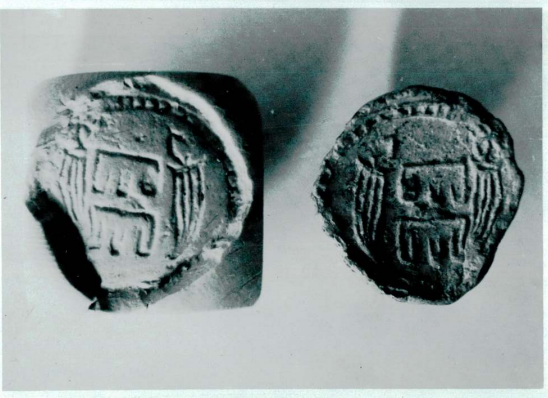