The Establishment of Ottoman Sovereignty in Thessaloniki (Selanik) and loannina (Yanya)

In the present study we dwell upon the circumstances under which Thessaloniki and loannina came under Ottoman sovereignty. These two towns were conquered by Murad II within an interval of seven months. This study is based upon Byzantine, Ottoman and Latin sources; we have also studied the information gleaned from Byzantine sources about Ottoman poli­cies of conquest. As Thessaloniki became part of the Ottoman realm by con­quest, while loannina did so by conforming to the Sultan to surrender, diffe­rent policies were applied to the two cities. The conquests of Murad II have been studied not with the present value judgements in mind, but considering the conditions and necessities of the fifteenh century. The conquest is viewed within the framework of Ottoman conquest policies based upon on Fıkıh (the Muslim religious and legal Code).

An eye witness account of the conquest of Thessaloniki by Murad II is Johannis Anagnostis’ Chronicle Διήγησή nepi τή$ τελευταίοι ΓΛλωσεω5 τή$ Oeoaakovikns. This text gives detailed information about Murad Il’s attempt to secure the peaceful surrender of the city before moun­ting a full-scale attack, and the events that happened when the city was taken by force (Anveten). On the other hand, the amannâmes granted to the people of loannina written in Greek by Murad II and the Beylerbeyi (Govener Gene­ral) Sinan Paşa, is of value with respect to the privileges granted by the Otto­mans to their non-Muslim subjects, provided that the latter had surrendered. No evaluation of these Nâmes concerning the conquest policies of the Otto­mans has as yet been undertaken. Neither has the Nâme of Murad II been mentioned anywhere in secondary works on Ottoman history.

The Capture of Thessaloniki

Thessaloniki under the Ottoman suzerainty during the reigns of Murad I (1387) and Bayezid I (،391) again passed into the hands of Byzantium fol­lowing the battle of Ankara in 1402. Following the accession of Sultan Murad II in 1421 while Turkish raids extended up to Morea, Thessaloniki also was subjected to continual Turkish attacks. According to the information povi- ded by Symeon Archbishop of Thessaloniki in his work known as the “Disco­urse on St. Dimitrius” the people of Thessaloniki were divided into two sepera- te camps: One group favourite the Turks, and the other the Venetians. The nobles of the city prefen-ed Venetian rule while the common people favoured the Turks. As can be understood from the Chronicle of Anagnostis the majo­rity were on the Turldsh side .

Due to incessant Turkish attack and the famine that ensued in the city, the Despot Andronikos of Thessaloniki had previously surrendered the city to the Venetians upon certain terms. Sultan Murad II considered the surren­der of Thessaloniki to the Venetians as an agression against Turkish territori­es, since the city had previously been under Turkish rule. By intensifying the Turkish raids on the city, the Sultan declared war against Venice. As undens- tood from Venetian chronicles as well as from decisions of the Senate, during the Ottoman-Venetian war 1423-1430 Venetian govemer of Thessaloniki did not conform to the terms of the treaty of surrender, and increased their acts of tyranny over the people.

After Sultan Murad II had strengthened his position in Anatolia and the Balkans, on 26 March 1430 he arrived with his army at the gates of the city. The Sultan was accompanied by Hamza Paşa, beyberbeyi of Anatolia and Sinan Paşa beylerbeyi of Rumelia. As we leam from the Chronicle of Anagnostis, Murad II in conformity with the principles of Fıkıh invited the city authorities to surrender three times, he even tried to persuade them to do so by sending Christian envoys. On the other hand the Greek people even though their sympathies were with the Turks, had to fight the Sultan under the pressure of their Venetian rolers. Following a fou day siege of the city both by land the sea, Thessaloniki was conquered by Turks. According to Fıkıh as a city was captured by،،(anveten) the people were considered captives while their lands and property were deemed as state property. We le­arn from Anagnostis’ chronicle that about 7000 Thessalonicians inclu­ding the author himself, were taken as captives. Altough a certain amount of looting and destruction occured in the city, this did not last long. The Sultan intervened to stop the looting, he himself paid the ransom of a number of dignitaries and set them free. Moreover, he issued the order that those who had deserted the city should come back and their properties wold be retur­ned to them. According to the chronicer while evetybody began to entertain high hopes for the future, the Sultan returned to the city two or three years later (1432-33) and disappointed the expectations of the people by the measu- res he took. These included application of the policy of talrrir (survey) and surgun (deportation) in conformity with Ottoman policies in conquered ter- ritories. Turkish settlers were brought into the city from Yenice of Yardar. 'rhe chronicler stated that the churches and the monastiries were taken from the Christian and that the original inhabitants were deprived of their proper- ties and real estates. At this point two possibilities must be considered, '!'he first one is that following a conquest, mulk (full profjerties) or properties of Vakrf (religious foundation) had been converted into miri (state property). The second possibility is that the chronicler may have exaggerated the num- ber of confiscations. From Anagnostis we know that Ahiropietos and the monastery of Prodromos were transformed into mosques while all the rest were left in the hands of Christians. Since the fact is established, the second possibility appears more probable. Altough a number of churches and mo- nasteries were not looked after properly following the conquest, there are Greek and Ottoman document testifying that the monks of Ylatadon monas- tery obtained certain exemptions and priviledges as from the time of Murad II, and that they had sided with Turks during the conquest.

The lahrir defter (tax registers) compiled in Thessaloniki in 1432-1433 and which was mentioned by Anagnostis, has not been discovered. The first ex- tant tahrir defter on nefs-¡ Selfinik (the city itself) is dated 1478 It has been used by H. Lowry in his article “Portrait of a city” According to authors conclusion, during the first five decades following the conquest the city pre- serd its Byzantine characteristics. As from the last years of 15 ٠h centur-y Jews deported from various parts of Europe found secure refuge in Ottoman territories and settled in Thessaloniki. By the beginning of the Sixteenth cen- tur-y, they formed the overwhelming majority of the population.

When Carlo Tocco died in 1429 without leaving an heir, his nephew Carlo Tocco II was involved in a civil war between himself and Carlo's illegi- timate children. Memnon, who was one of the five brothers, asked Sultan 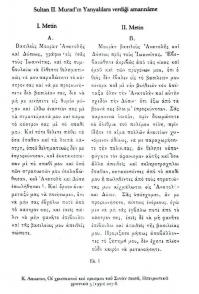 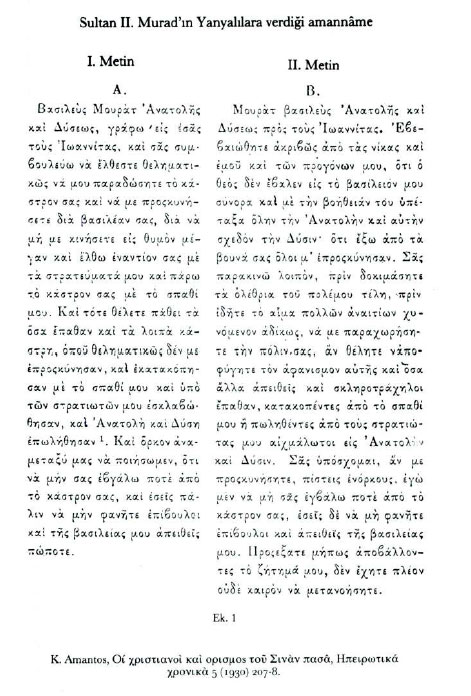 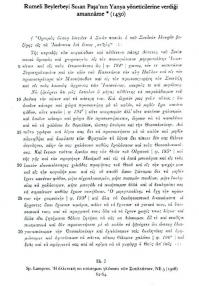 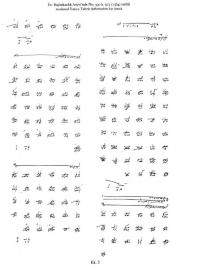 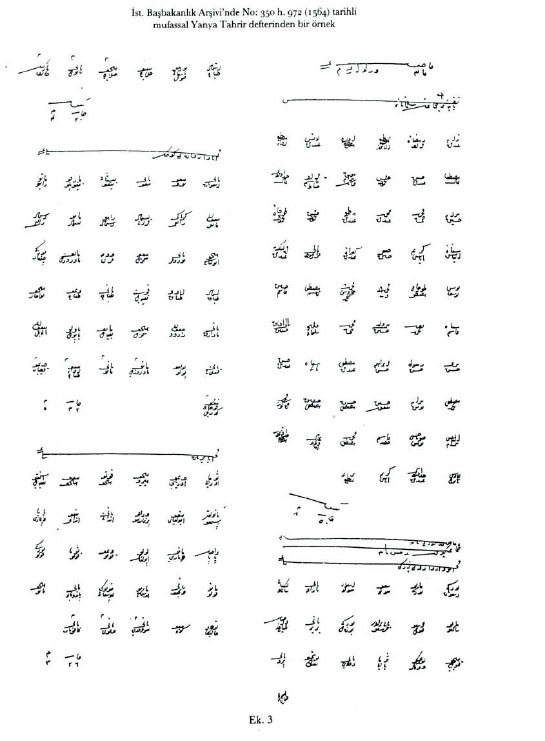 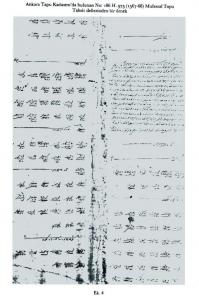 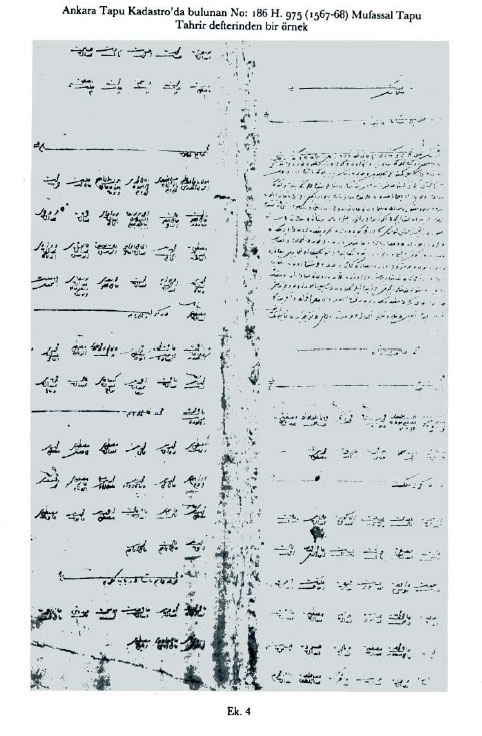 Murad, for help. Following the capture of Thessaloniki, a part of the Ottoman army was directed against certain Albanian chiefs who had revolted, while the other part continued to loannina under the command of Sinan Paşa. There is detailed information on the conquest of loannina in the Epirus Chronicle{ in Greek). According to the Chronicle, when Sul­tan Murad II twice, sent armies to loannina the citizens held narrow passes of Epirus.

Sultan Murad and the Beylerbeyi of Rumelia Sinan Paşa had sent propo­sals written in Greek to the people of loannina, offering them aman. These amânnames are the oldest documents showing the rights and privileges gran­ted to to non-Muslims accepting the Ottoman suzerainty. On the docu­ment the nâme (Orismos) of Sinan Paşa figures more prominently than that of Murad II. According the document, ancestral rights, the properties and possessions of the people of loannina would be guaranteed without guesti­on. Fief holders were to continue in their holdings, now considered as tı­mar and the people were permitted the free exercises of their religion. The Metropolitan of loannina was to retain his judicial prerogatives and all other ecclesiastical rights. Furthermore, a guarantee was given that the city would not be looted, that the people would not be taken captive, and that boys would not be drafted for service in the army. Any other request of the loanninans were to be granted. If the people of the loannina had not surrendered, the same fate that befell 'Fhessaloniki could easily have befallen loannina and the town might have been looted and destroyed. After receiving assurances concerning the؛r future position The People of loannina sent envoys to the Sultan, and surrendered the keys of the city. In return obtained a decree assuring them of the priviledges that had pre­viously been promised. Thus on 9 October 1430 loannina was annexed to the Ottoman territories; in particular, it is understood that the autonomous ad­ministration of the people of loannina, which had been obtained from Byzantine Emperors, was maintained over a long period under the Ottoman rule.

So far, not the least research has been made on the history of loannina under the Ottoman rule. The present study introduces demographic data on the city, according to the first tahrir defter. The mufassal tahrir defter on nefs-i Yanya, {the city itself) is kept in Istanbul Başbakanlık Arşivi (the Prime Minister's Archives), the call number is: 350, H. 972 (1564). Accor- ding to this defter, loannina was a mirliva hassi, there were 35 Christian quarters and only I Moslem quarter. The Muslim population consisted of 250 inhabitants (50 households + 8 bachelors) while there were 5905 Chiristi- ans (1181 households + 134 bachelors) living in the city. As to the Jewish population, they were not recorded in the register of 1564, but they are mentioned as 35 nefer (tax payers) (175 inhabitants)in the mufassal ahrir defter belonging to the year 1579. Thus by surrending and asking for aman, loannina avoided the fate of Thessaloniki. No deportations occured in the area, perhaps in part due to the isolated geographical position of the town. Even more than one hundred years after the conquest, the overwhelming majority of the population was still made up of Christians.