The English explorer and antiquary Charles Fellows (1799 - 1860) is best known for his travels in Asia Minor, especially in Lycia. On his first expedition to Asia Minor, in 1838, he discovered two important Lycian cities, Xanthos and Tlos. He described and illustrated his discoveries in A Journal written during an Excursion in Asia Minor (London, 1839). The publication of this Journal, and Fellows’ numerous drawings and inscriptions, aroused so much interest that the Trustees of the British Museum applied to Lord Palmerston, Secretary of State for Foreign Affairs, to ask the Sultan for a firman authorizing the removal of some of the Lycian works of art.

In February 1840 Fellows returned to Asia Minor, to continue the exploration of Lycia and, in anticipation of possessing the firman from the Sultan, to point out the most desirable objects to take away. This second expedition[1] was highly successful in that eleven more Lycian cities were discovered, but disappointing in that, despite the diplomatic efforts of Lord Ponsonby, British Ambassador at Constantinople, the firman could not be obtained.

Fellows was back in Asia Minor in November 1841 and, after further difficulties and frustrations, at last obtained the desired firman by personal application at Constantinople. Under his guidance the Xanthian marbles were brought away in 1842 and 1844.[2] In 1845 he was knighted by Queen Victoria in recognition of his discoveries and of his services in bringing the Xanthian antiquities to England. Those antiquities remain prized possessions of the British Museum.

I possess an interesting association copy of Fellows’ Journal of his first journey. On the blank page after the title-page is the following autograph inscription to the author’s sister (Plate 1 ) :

In the countries in which
I have been rambling, it was well
said “that in order to Educate a people,
you must instruct Mothers.” If by
any information contained in this
Journal, which was kept at your
suggestion, I contribute to the infor-
mation of your Children, I shall be
amply rewarded, knowing that they
will be happier, in having fewer
prejudices, than had their Uncle,
and your sincerely attached

With the book is the following autograph letter, written on two sides of a sheet of notepaper with a mourning border (Plate 2) :

My dear Miss Oldham
Some of the books
formerly given by me to my
poor Sister, have found their
way again to me. You know 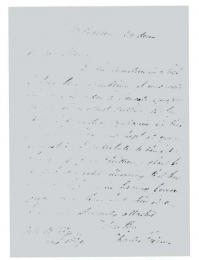 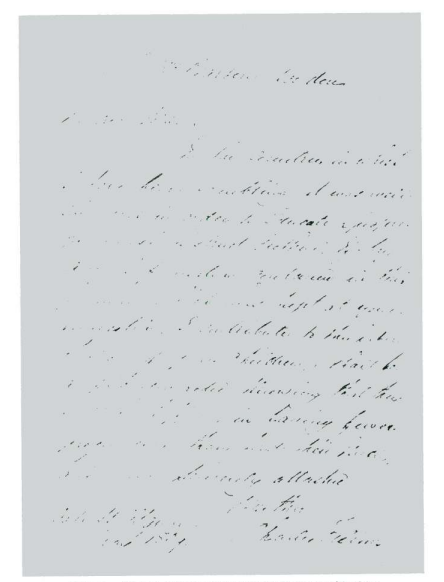 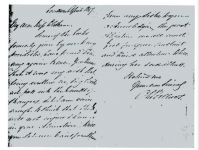 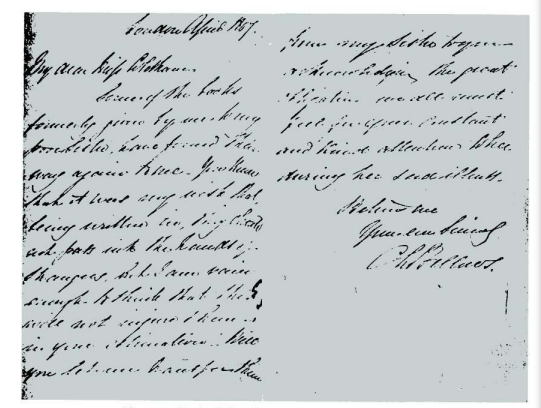 that it was my wish that,
being written in, they should
not pass into the hands of
Strangers, but I am vain
enough to think that this
will not injure them
in your estimation. Will
you let me transfer them
from my Sister to you
acknowledging the great
obligation we all must
feel for your constant
and kind attention to her
during her sad illness.
Believe me
Yours ever Sincerely
Chs Fellows.

The letter was presumably written from 4 Montague Place (off Russell Square J, London, where Fellows himself died of pleurisy on 8th November, 1860.

Although the book which he presented to his sister has now passed into the hands of a stranger[3] - a stranger who is unashamedly making public what he intended to be kept private -, I hope that the publication of the inscription and letter, more than a century after his death, would not have displeased him. Both writings reflect well on his character, and the inscription is of considerable interest. In the Preface to his book he makes no mention of his sister, and yet as the one who suggested the keeping of the Journal she must take some of the credit not only for the book itself, but also for the important happenings which its publication provoked.

Fellows’ reference to his prejudices well accords with passages in the Journal. In the Preface (p. v) he writes: “It will be gathered from my Journal that at the time of my arrival in the country I was strongly biassed in favour of the Greeks, and equally prejudiced against the Turks; and it will be seen in the course of the narrative how this unfavourable idea of the Turkish character was gradually removed by a personal intimacy with the people.” This change of attitude may be illustrated by quotations from the Journal itself. In recording his impressions of his first full day in Smyrna (February 13th), he writes (p. 3): “The appearance of the people generally seems to me not pleasing[4]; there is no trace of simplicity of manners, ... I do not like any trait in the character of the Turks which I have yet seen; what a contrast do they form to the Greeks, who appear all intelligence, and who are certainly simple and unaffected!” Three months later he was back in Smyrna after a journey of three thousand miles through western Asia Minor, and on May 13th, the last day for which there is an entry in the Journal, he noted his observations on the manners and character of the Turkish people (pp. 293-300). “How different”, he writes (p. 294), “are now my feelings towards the Turks, from those uncharitable prejudices with which I looked upon them on my first arrival at this place! To their manners, habits, and character, equally as to their costume, I am become not only reconciled, but sincerely attached; for I have found truth, honesty and kindness, the most estimable and amiable qualities, in a people among whom I so little looked for them.” He goes on to discuss (pp. 294-298) the qualities of the Turks: their devotion to their rel'gion and their submission to the Divine Will; their hospitality; their honesty and truthfulness; the honour which children show their parents; their general adherence to monogamy, though the law allows several wives; their kindness to animals; their abstinence from wine. To this last matter he attached great importance (pp. 297-298) : “To the abstinence of this people from wine ... is perhaps to be attributed very much of their moral as well as physical health. The stream of intemperance, which would undermine the pure principles of conduct above adverted to, is thus totally arrested. .. . Does not Christian Europe stand rebuked before these faithful followers of the false Prophet? Were we as devoted to our religion as the Mahometans are to theirs, what a heaven upon earth would our lands be!”

Fellows’ candour in describing his prejudices and his change of attitude is laudable. However, the change of attitude itself will not surprise anyone who, like the present writer, has had the privilege of travelling through Anatolia and coming into close contact with a people remarkable for their great kindness and hospitality and for their dignified and sober way of life.

The value of Fellows’ discoveries in Lycia and elsewhere in Asia Minor cannot be disputed. But was the removal of the Xanthian sculptures justifiable? At that time perhaps it was: if the objects removed by the British had been left where Fellows found them, it may be that not all would have survived. However, for many years Turkey has of course been both anxious and able to look after the architectural and archaeological treasures within her borders[5], and one wonders where Fellows, if he were alive to-day, would wish the Xanthian marbles to be now. I should like to think that this fair-minded and open-minded man, who developed such a deep admiration and affection for Turkey and her people, would want them to be returned to their proper home.