A Hoard of Bronze Coins of Lysimachia

A hoard of bronze coins minted at Lysimachia was found in Turkish Thrace in the early part of 1997 and in due course came onto the market in Istanbul, where a group of 23 coins were purchased by a dealer from Ankara. This group of coins was subsequendy brought to Ankara and so came to my attention when it was purchased by a registered collector, Mr. Cafer S. Okray. A few months earlier Mr. Okray had purchased in a similar manner two other small groups of Hellenistic coins, one of posthumous issues of Lysimachus, the other of New Style Athenian tetradrachms. These two groups had also appeared on the market in Istanbul, reportedly having been found in Thrace. In addition, a considerable number of individual coins from the same region have been offered for sale in recent months. For example, before Mr. Okray purchased the group of 21 coins that is discussed here, he had already acquired (in March of this year) a single coin of the same type. This example, bought from the same dealer, was registered as item no. 342 in his collection in accordance with the Turkish laws pertaining to private collections and collectors. It is because my job as one of the numismatists at the Anatolian Civilizations Museum in Ankara is to carry out and oversee these regulations that I am now in possession of the details relating to the acquisition of this group of coins by Mr Okray. As a result, it would seem quite likely, given the similar circumstances of their acquisition and the fact that the single coin (no. 342) is overstruck in the same way that many of the examples in the group are, that they represent part of a large hoard that has been dispersed in the trade.

It is, therefore, important to publish this group, not only because of its intrinsic importance but also because in this way it may provide details that will allow colleagues to identify other groups belonging to the same hoard and so to reconstitute its original composition as well as to gain more precise information about its find-spot. In just such a way my work in Sinop Museum allowed me to identify a group of 69 tetradrachms in its collections as forming part of a larger hoard. A group of coins from this hoard had already been published by C. Boehringer, who stated that it had been found in Trabzon[1]. Research into the history of the Sinop material, however, revealed that this hoard had in fact been found at Ordu[2]. It is interesting to note that in both groups the most common type found is a posthumous issue of Lysimachus[3].

The present group comprise 23 specimens, all of which were minted by the city of Lysimachia between 309 and 220 BC. This city, whose exact location remains unknown, was founded by Alexander’s famous general and successor, Lysimachus. He had made himself king of Thrace and in 309 BC he decided to establish a new city bearing his own name on the isthmus to the Thracian Chersonese (the Gallipoli peninsula). Lysimachia thus replaced the earlier city of Cardia, which lay in the same area. The new city had a strategic position, guarding the passage both through and across the Dardanelles, and as a consequence it played a significant role in the struggles between the various Hellenistic kingdoms[4].

The coinage of Lysimachia is relatively unknown, since few specimens from the city's mint have been published[5]. The present group thus not only represents the first recorded hoard from Lysimachia but also the largest number of similar issues to appear together. It is thus eminently appropriate to offer this small study in honour of Frau Dr. hábil. Edith Schónert-Geiss.

The most interesting feature of the group is that most of the coins have been overstruck on earlier issues. Signs of such an overstrike have been detected on 14 examples. All have the same obverse type, namely that of the head of a youthful Herakles wearing a lion's skin, which is meant to recall portraits of Alexander the Great. But two variants of the type can be distinguished among the present group. The first sub-type, which is found on the majority of the coins, is a representation of the young Herakles that conforms closely to the one found on Alexander drachms and tetradrachms issued during his own lifetime. The second sub-type, distinguished only on nos. 6, 7, 13 and 21 in the following catalogue, depicts Herakles with longer, dishevelled hair. Likewise, the representation of the lion's skin headdress on the two sub-types differs. The second sub-type's depiction of Herakles may thus recall that seen on the posthumous issues of Alexander and Lysimachus, and in this case the four coins belonging to this sub-group may be considered as later issues in the series.

On two of the coins in the first sub-group the name of the Syrian king Antiochus can be read on the flange. The word ANTIOXOY is plainly visible on the obverse of one example (no. 4) and on the reverse of the other (no. 10). In both cases traces of other letters are also detectable below the king's name, but these are difficult to make out. The letters may be AS or WS, representing part of the word BAEIAEQE. Alternatively, they may be a monogram, such as is commonly found on coins of the Antiochids. It remains uncertain which Syrian king re-issued these coins from the mint of Lysimachia, stamping them with his name. 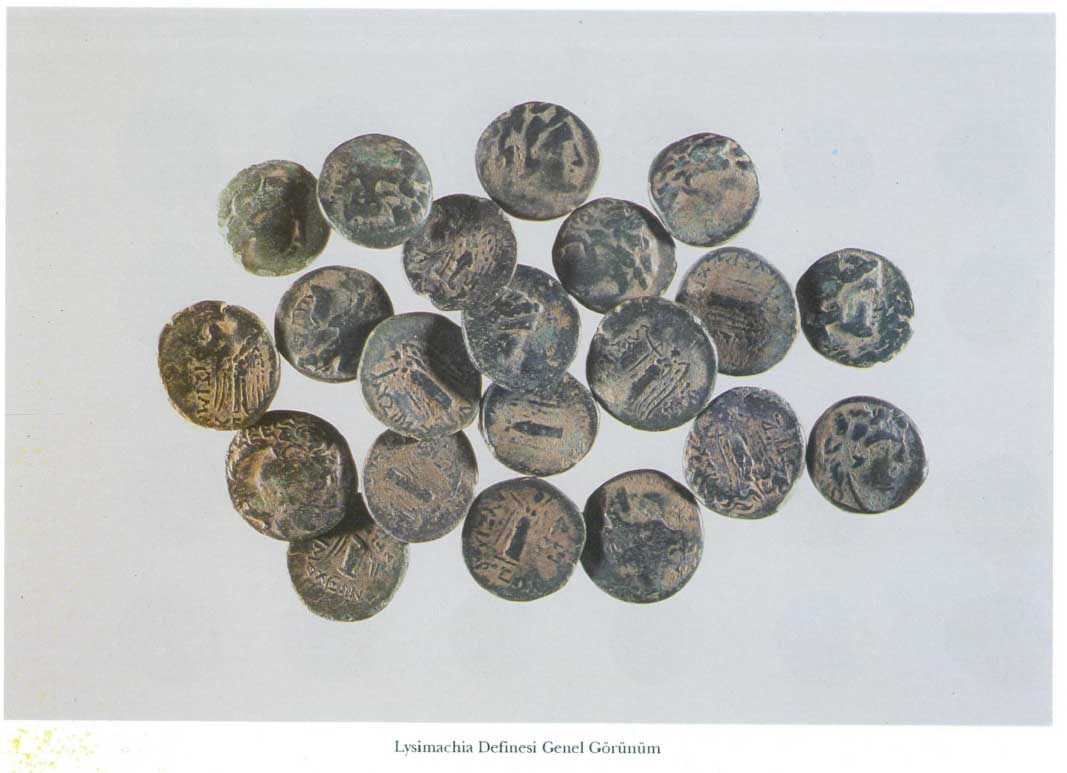 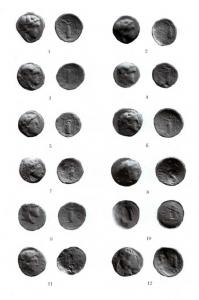 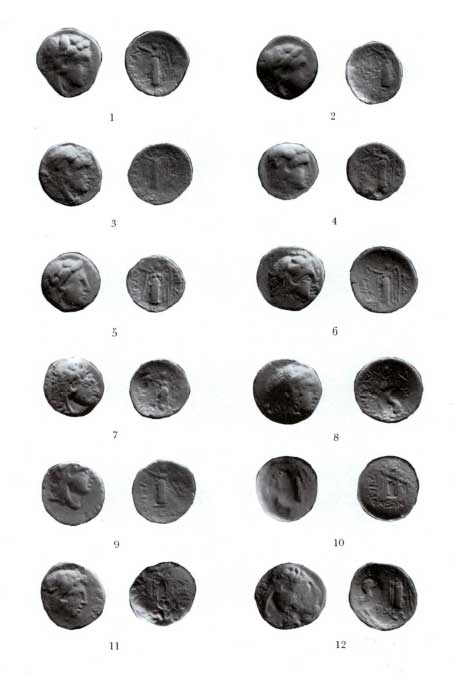 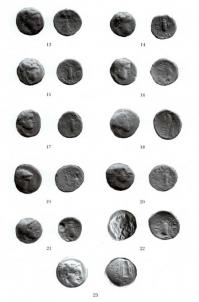 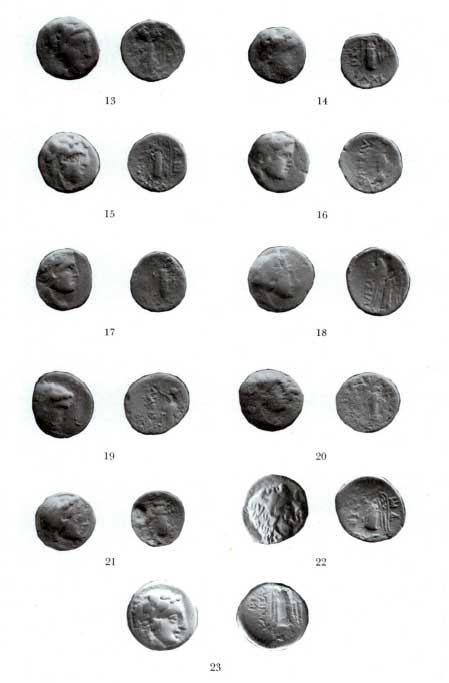